Past Exhibitions and Events | 2013 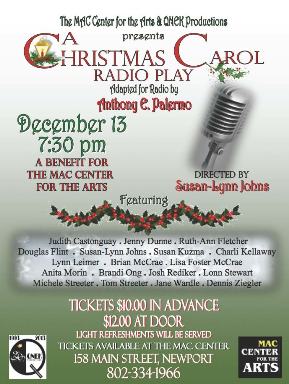 QNEK Productions performed to a sold out crowd on December 13th at the MAC Center. “The Christmas Carol” Radio play was performed by 19 members of QNEK productions including MAC performance members Susan Lynn Johns and Lynn Leimer. With all tickets being sold, this was a very successful benefit event for the MAC Center and we are grateful for QNEK’s support and talents which they shared with us on Friday. 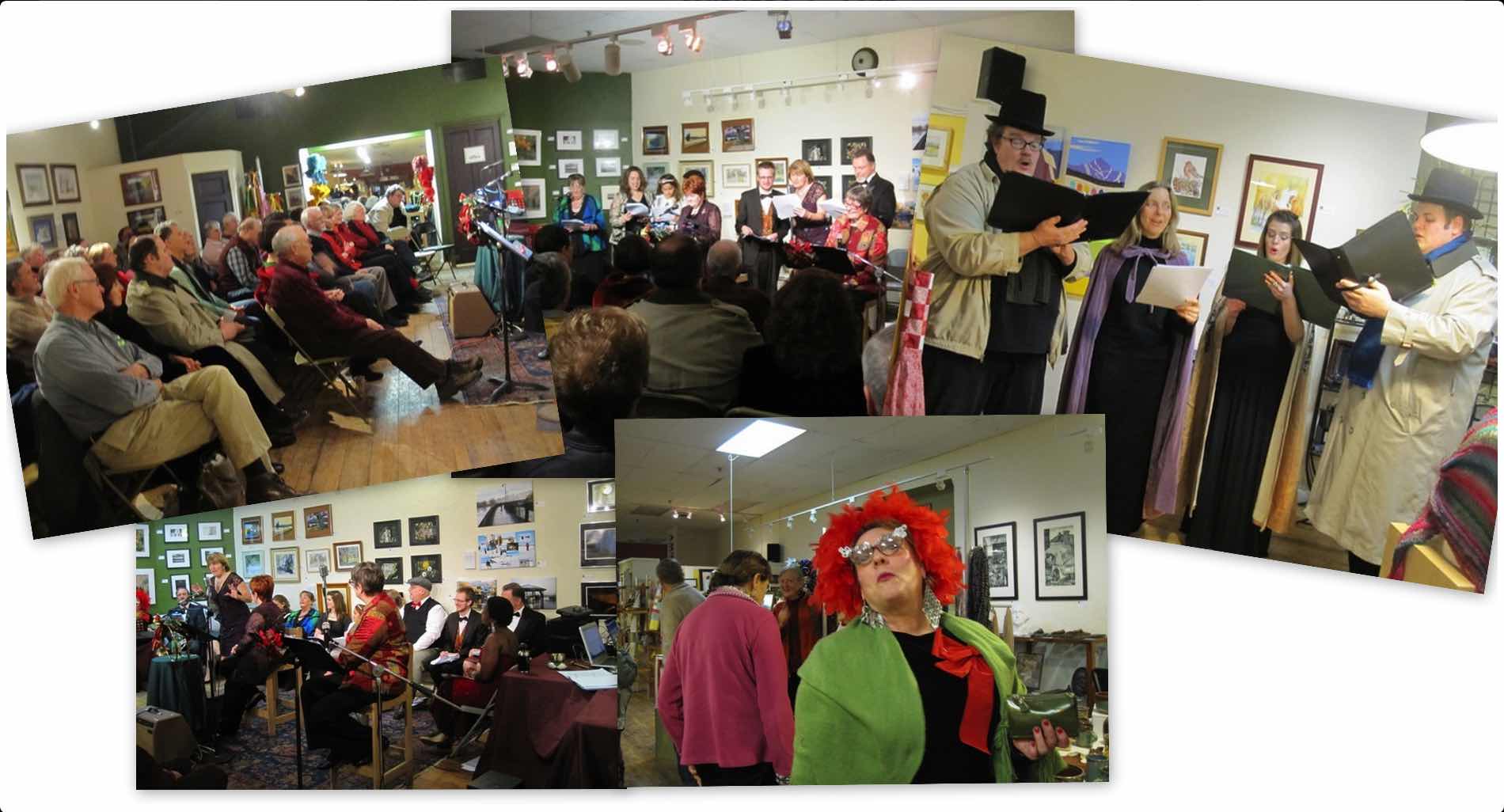 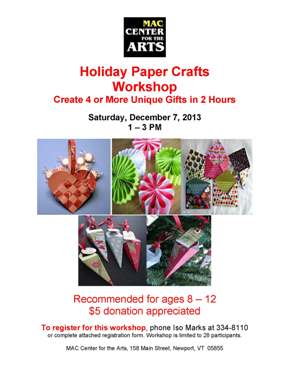 Holiday Paper Crafts Workshop/ December 7, 2013 Twenty eight area children attended the Holiday Paper Crafts Workshop on December 7th. The Education Committee including MAC Center artists Sydney Stevens, Bonnie Nash, Andrea Strobach and Diana Poulin ran the workshop which helped children create 3 to 5 holiday paper crafts which they could then share with their families for the holidays. Thank you to the Education Committee for another successful event in keeping with our mission of keeping the arts alive on Main Street! 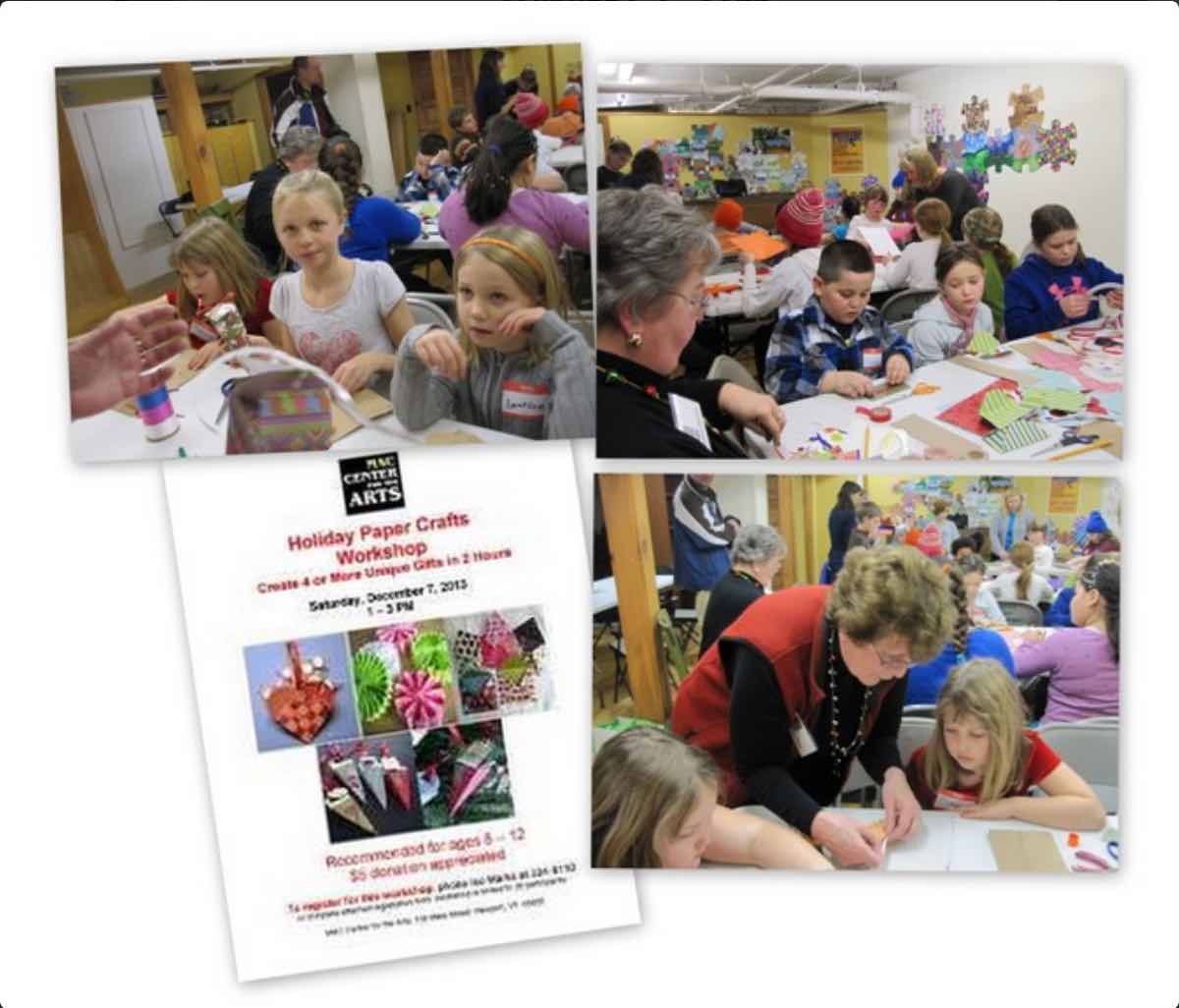 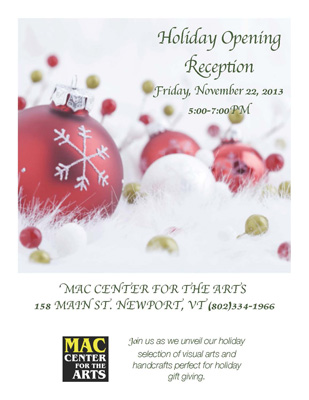 The Tradtion continues. The MAC hosted a Opening Reception for the Holiday season

Everyone who has seen and admired Bonnie Nash’s felted art wonders how did she do that. Bonnie was generous enough to present her techniques and help other artists learn the basics of felting. The artists who attended were in agreement “It was a great class.” 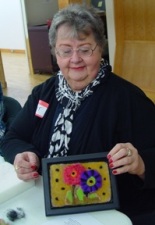 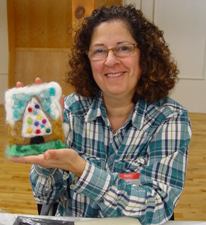 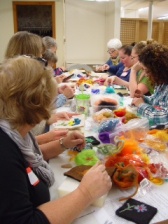 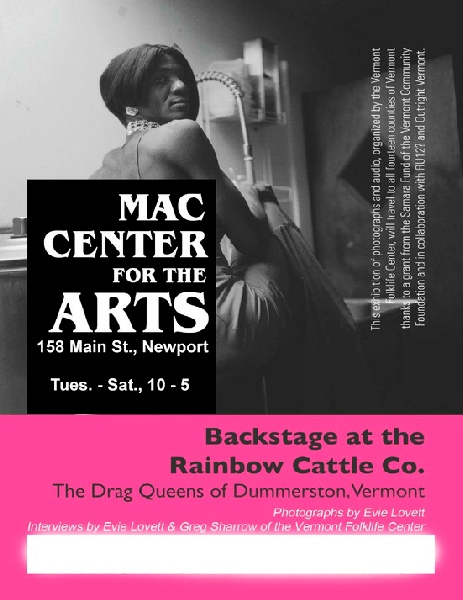 Evie Lovett describes photographing the Ladies of the Rainbow Cattle Co. as a personally transformative experience—transformative because she chose not to remain at a safe, comfortable distance on the margins of their world. Instead Evie plunged headlong into the lives of these drag performers, creating an ensemble of images that invite the viewer into the intimate space of their basement dressing room. We are welcome there because Evie was welcome. These are unguarded moments because Evie had become one of the girls. Along the way she was wowed by the Ladies’ sense of personal freedom, their outrageous creativity, and their bawdy good times. Evie brings a sense of wonder, a deep and abiding curiosity, and a fundamental respect for human difference to her work as a photographer. She is also a great visual artist. Welcome to Backstage at the Rainbow Cattle Co. Let your hair down and enjoy!

We’re pleased to announce Donna Walsh has agreed to serve as MAC’s webmaster. Donna is a very experienced web producer. She will do all work remotely including layout, revisions, class and event updates, member information updates and revisions and proofing. Please send all web updates to Julie Poulin who is responsible for MAC Public Relations. Julie and Donna will work together to create MAC’s presence on the web. 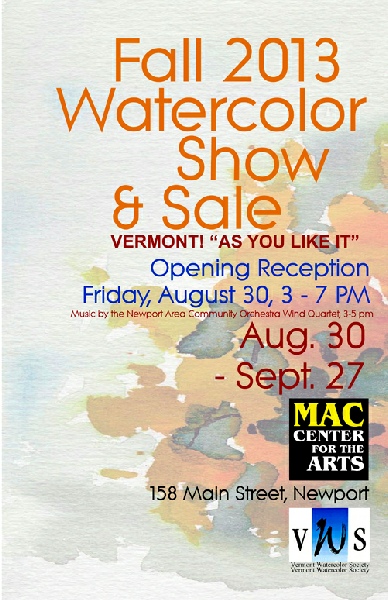 Open to any watercolor painterThey propose the following schedule participants deliver their work August 26 and 27, committee hangs work August 28 and 29, opening reception Friday, August 30 (Labor Day Weekend), close on Friday, September 27 and all work removed September 28 & 29. Unframed, matted, shrink wrapped or sleeved and properly marked work will be displayed in bins Sales are cash and carry except during opening reception when buyers will be asked to leave the work until end of reception Artists will be asked to replace work that is sold MAC takes 30% commission, processes all sales and issues the checks to artists For additional Information, contact Pat Lipinski at lcamper5@comcast.net. 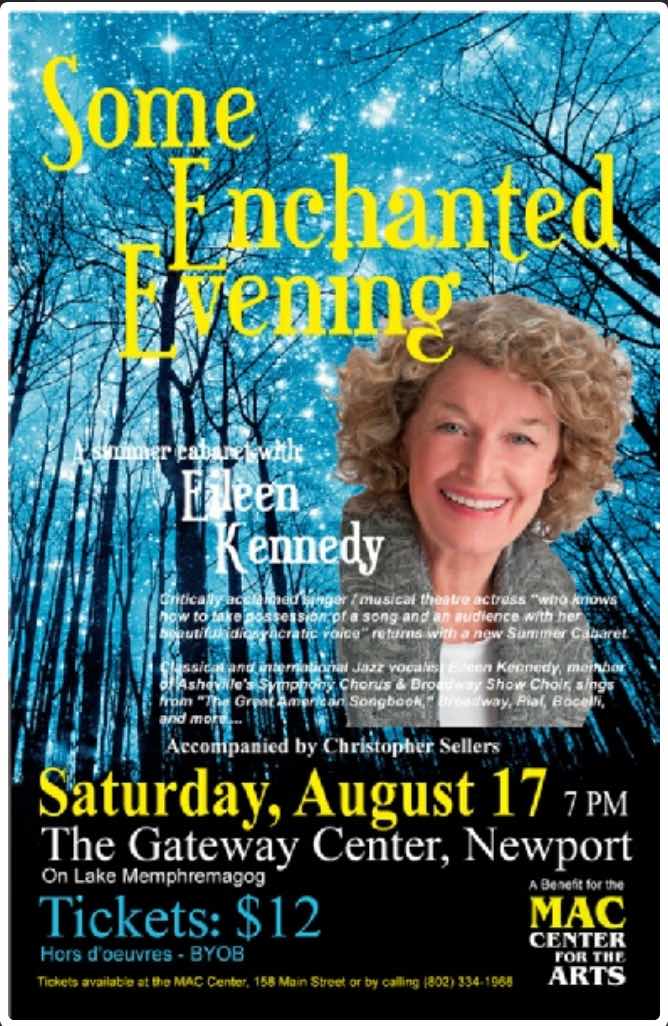 Our area gardens come indoors for this exciting event that draws a large audience. Floral artists from the Four Seasons Garden Club of Orleans County and beyond come to the Gallery and select a painting several weeks before the event. They create beautiful floral arrangements to complement their chosen work of art or photograph. The Opening Reception was held on Thursday, July 25th where guests met artists and designers, as well enjoyed some great wine and tasty food. Music by the Wind Quarter of the Newport Area Community Orchestra.

BOARD of DIRECTORS ELECTED at ANNUAL MEETING
In June 2013, MAC held the annnual membership meeting where the board of directors were elected. Jennifer Hopkins, Iso Marks, Victoria Mathiesen, Julie Poulin, John Stevens, & Sydney Stevens, were elected to a 2 year term. At a subsequent meeting of the board of directors the following officers were elected unanimously.
John Stevens, President
Iso Marks, Vice President
Jennifer Hopkins,
Sydney Stevens, Corporate Secretary 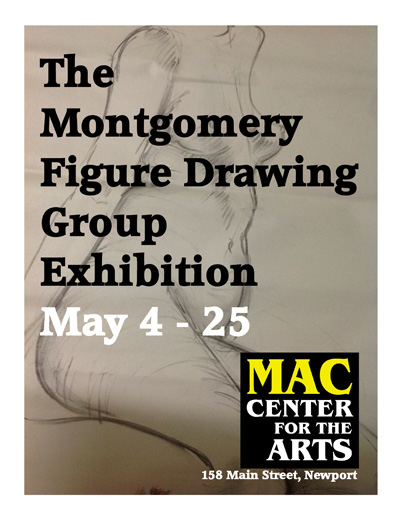 We are a group of artists at various stages development from beginner to professional. We meet every Monday at 5:30 pm in the Montgomery Library. We each pay $10 to cover the cost of the model. All are welcome to attend and enjoy the friendly atmosphere of the group. While drawing we chat and listen to background music chosen to fill in but not interfere with concentration. We often bring our recent works in for the group to see and comment on. We all have a positive attitude about each-other, and support each-others efforts. 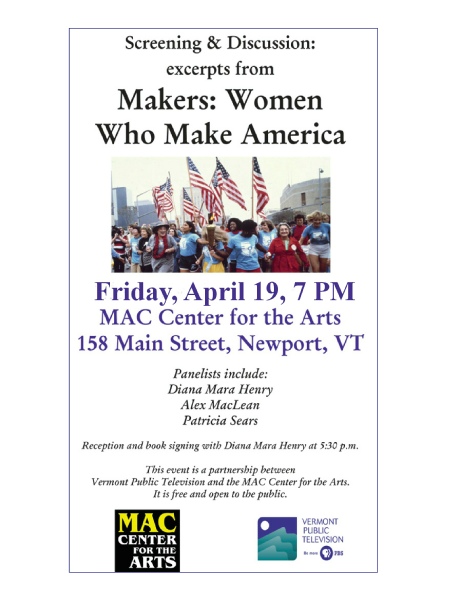 The MAC Center partners with VPT for the screening of the exciting documentary MAKERS. MAKERS: Women Who Make America tells the remarkable story of the most sweeping social revolution in American history, as women have asserted their rights to a full and fair share of political power, economic opportunity, and personal autonomy. It’s a revolution that has unfolded in public and private, in courts and Congress, in the boardroom and the bedroom, changing not only what the world expects from women, but what women expect from themselves. MAKERS brings this story to life with priceless archival treasures and poignant, often funny interviews with those who led the fight, those who opposed it, and those first generations to benefit from its success. Trailblazing women like Hillary Rodham Clinton, Ellen DeGeneres and Oprah Winfrey share their memories, as do countless women who challenged the status quo in industries from coal-mining to medicine. MAKERS captures with music, humor, and the voices of the women who lived through these turbulent times the dizzying joy, aching frustration and ultimate triumph of a movement that turned America upside-down. Please plan to come early to view our historic “Women on the Move” exhibit with photos by Diana Mara Henry. Book signing with Ms. Henry at 5:30 Panel discussion. Refreshments. FREE admission. 7:00 PM 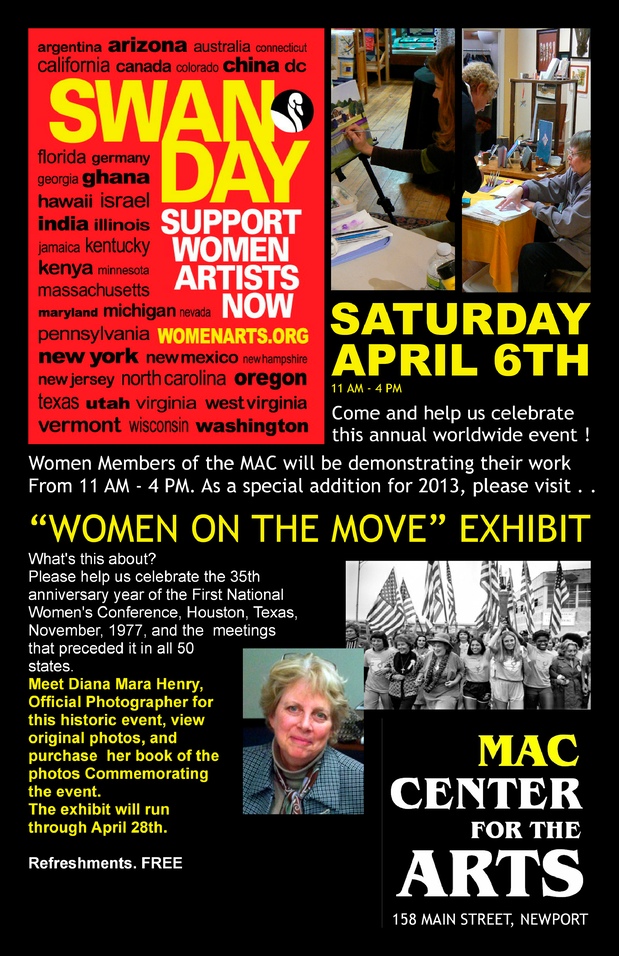 SWAN Day (Support Women Artists Now) is an international holiday that celebrates women artists. It is an annual event taking place on Saturday, April 6th (Women’s History Month) and the surrounding weeks. By focusing attention on the work of women artists, SWAN Day helps people imagine what the world might be like if women’s art and perspectives were fully integrated into all of our lives. The MAC is proud to be a participant in this annual worldwide event. Come and celebrate our women artists. Refreshments throught the day. 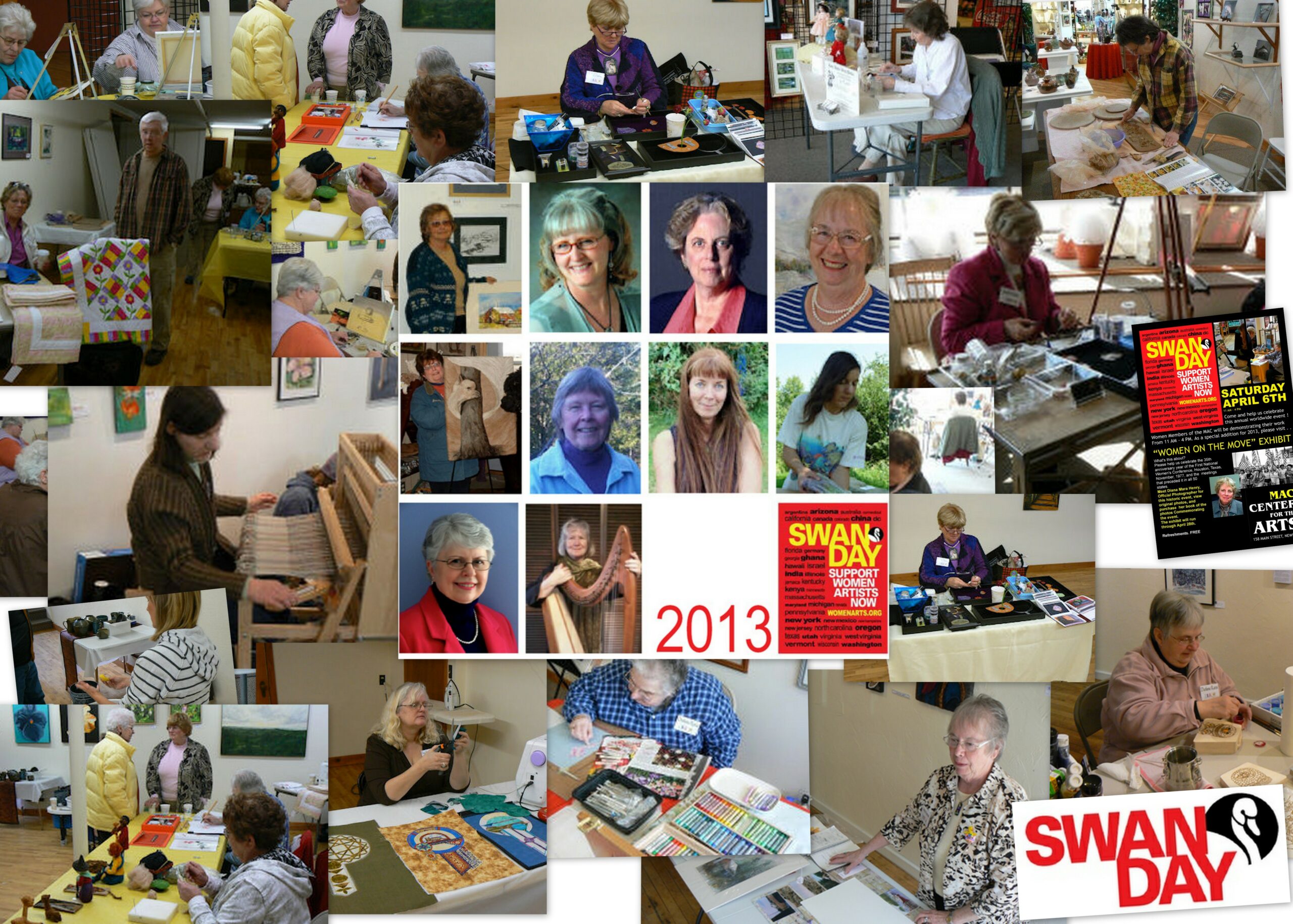 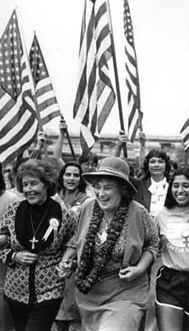 The Memphremagog Artists Collaborative hosts the historic exhibit, Women on the Move, sponsored by donations to Artspire/NYFA “Celebrating Women” during the entire month of April, 2013. First exhibited at the Manhattan Borough President’s office in November, 2012, the exhibit is accompanied by a book of the same name, with 221 of Diana Mara Henry’s unique and iconic photographs of the Women’s Movement, political conventions, the art and glamour scene of the go-go years in NYC, and women from all walks of life across the US and around the world. 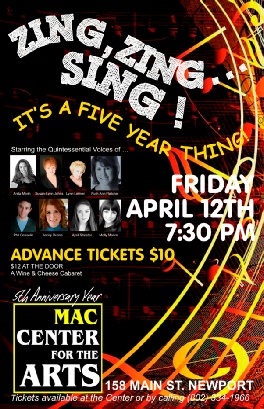 An evening of great music from Broadway presented as a benefit for the MAC Center by memers of QNEK. A Wine & Cheese Reception. Tickets go on sale March 1st. Get yours early as seating is limited. Wow! What a a great selection of Broadway show tunes! 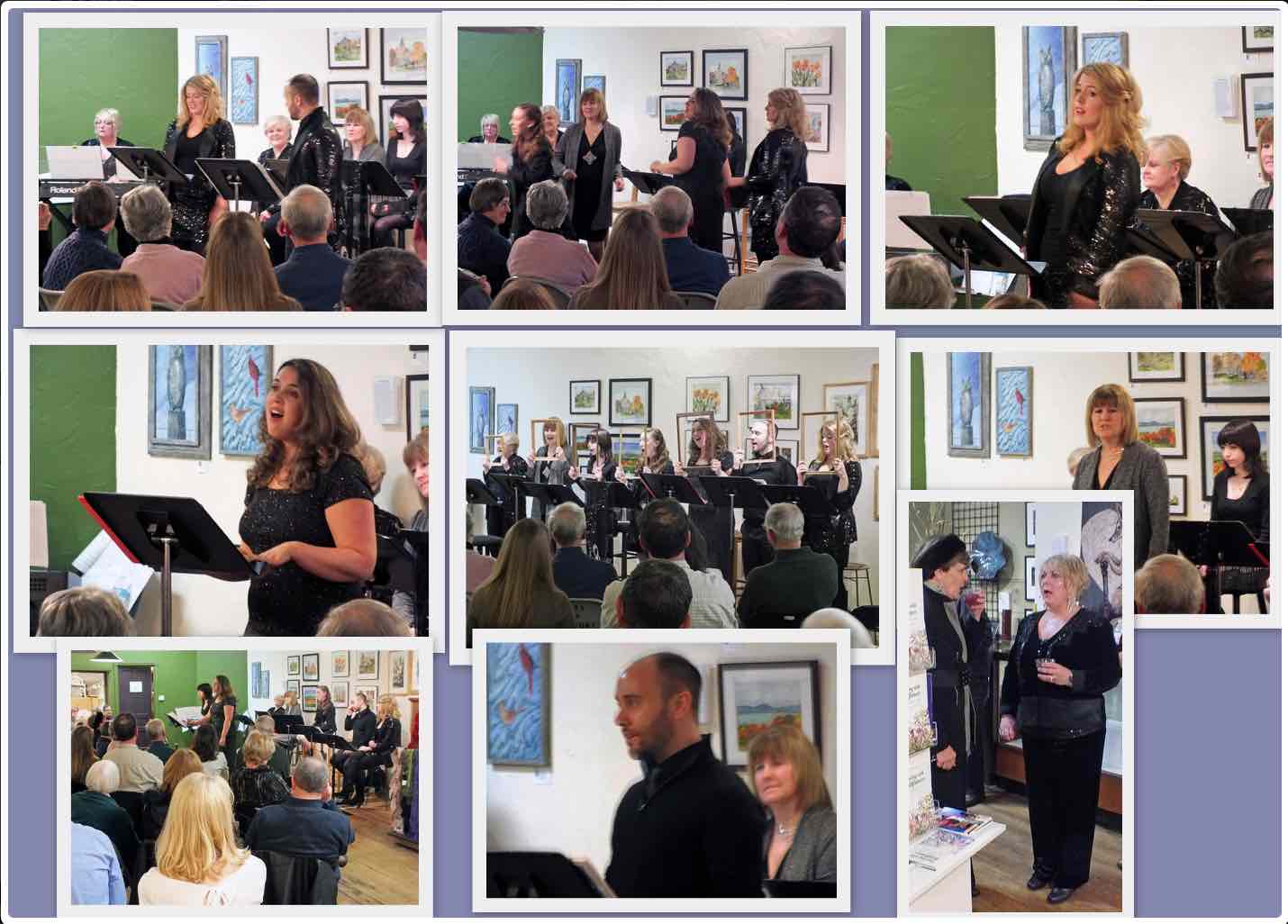 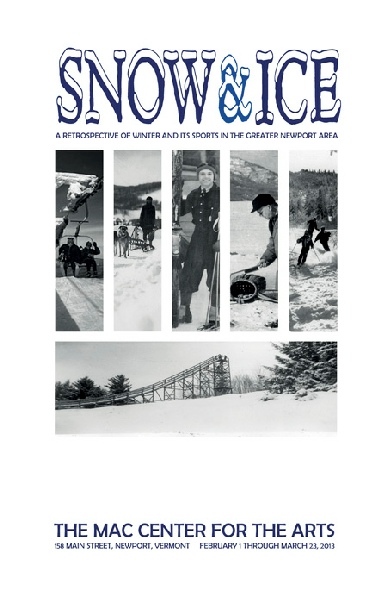 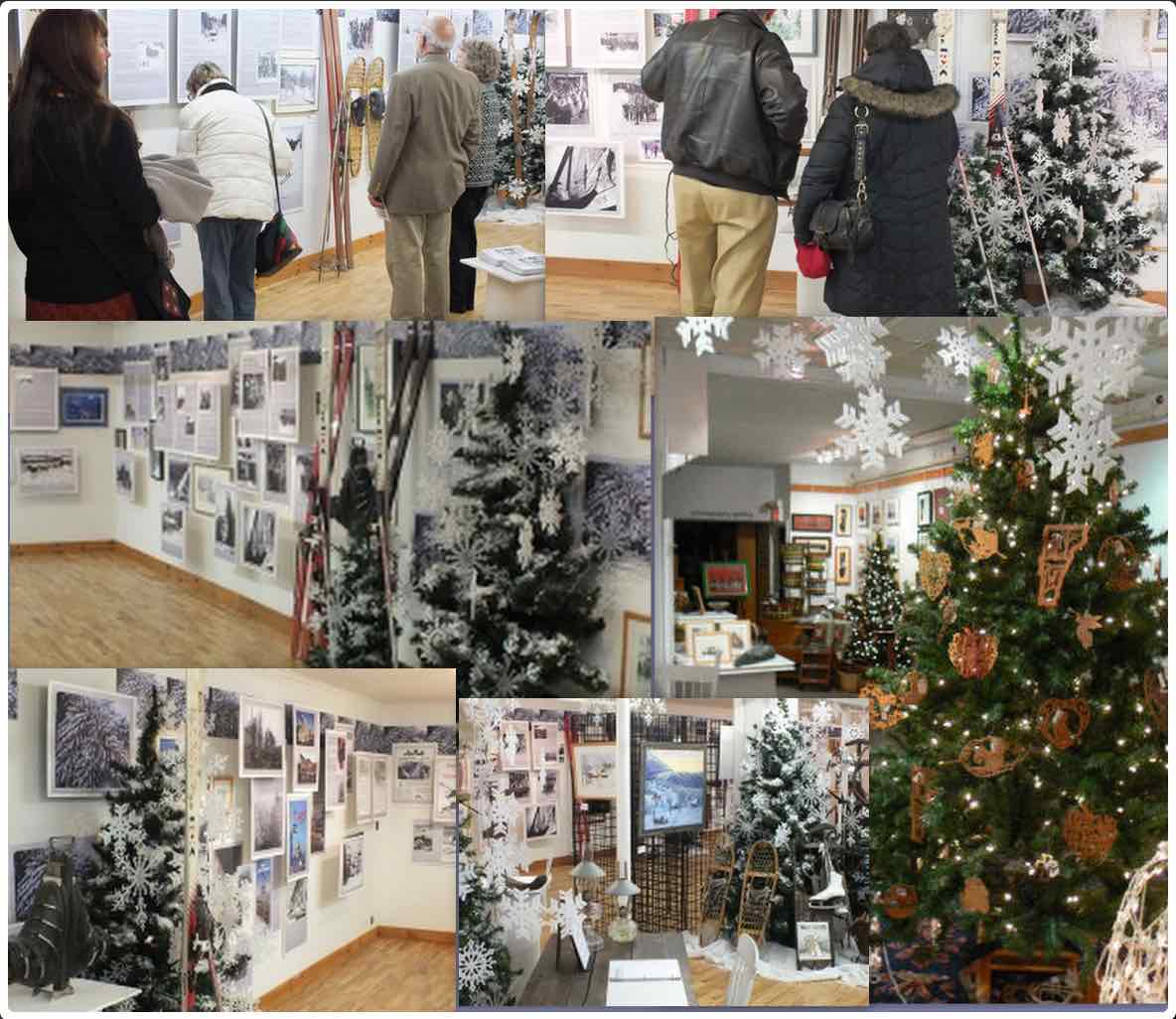