James (Jim) Allan McKimm, (age 71), of Troy, passed away on August 30, 2019.
at home after an over 25 year battle with heart disease. Jim was born on Staten Island in 1948, only child of James E. and Ruth E. (Swiatovy) McKimm. And was Educated St. John Villa Academy on Staten Island and in New York City at the High School of Art and Design and New York School of Interior Design. While at St. John’s, he studied voice and sang at the school’s chorus program at Carnegie Hall and the former Mosque Theater in Newark, NJ. Also, while on Staten Island, he won first place for three years running, the Outdoor Christmas Lighting Contest on Staten Island sponsored by the Jaycees. After realizing he would keep winning, the Jaycees made him the judge of the contest for several years.

Involved in church music from the age of 4 singing a solo at the former Graniteville Methodist Church, Staten Island. Jim began his years of organist at the former Asbury United Methodist Church (Staten Island) at the age of 14 after playing the piano from age 10 for the Sunday School, also serving Woodrow and Christ United Methodist Churches and Olivet Presbyterian Church, two of the churches at once. He also sang with the Richmond Choral Society and the New York All City Chorus, singing at Lincoln Center.

When he moved to New Jersey, as well as being organist, he also directed the 50 voice choir at the Hamilton United Methodist Church in Neptune, and presented annual holiday programs attended by as many as one thousand people. In 1980, he was Guest Director at the famed Ocean Grove Choir Festival where he directed a combines choir of 1200 voices. He remained at Hamilton for twenty years. Ballroom dancing also interested him and he won several national competitions over 9 years as well as performing on Staten Island for several years. In June of 2000, he became organist at St. Mark’s Episcopal Church where he served until his passing.

Jim also loved oil painting and showed his works at many arts shows, winning first place at the Sailors’ Snug Harbor Show in the 1960’s where he was reported as ‘an up and coming artist’ to be watched. He also wrote three history books, “Old Asbury: The History of the Asbury Methodist Church”, “Gravestone Insciptions in The Asbury Methodist Cemetery” (both Staten Island), and “The Friendly Church on the Hill: The History of the Hamilton United Methodist Church” (Neptune, NJ). In addition he was a charter member of the Ocean Township Historical Society, NJ, and a former member of the Richmond County Historical Society (Staten Island). He was a lifetime member of the Missisquoi Valley Historical Society.

Jim’s business career began in the Display Department at Sears Roebuck, Staten Island, then Mens Trimmer at the former Alexander’s Department Store on Lexington Avenue in Manhattan. His window displays appeared many times in industry publications. In 1973, he joined the former Steinbach Company where he worked his way up to Director of Visual Merchandising and Presentation for the 15 store chain, retiring in 1999 when the company was dissolved.

He moved to Vermont with his partner Paul in 1997, opening the Riverbend B&B in Troy and running that business for 14 years. During this time, he served on the Boards of NEKTTA and the Jay Peak Area Chamber of Commerce. During this time, he also served on the board of VT’s North Country Chamber of Commerce, as it’s president for one year. He was also one of the first members of the Newport City Renaissance Corporation. He was also a member at various points of the VT Covered Bridge Society American Guild of Organists, and Richmond County Historical Society.

Again, returning to the arts, Jim was a founding member and driver of the MAC Center for the Arts in Newport and obtained the initial funding to begin that group which is now in it’s 12th year. He was president for 6 years and later Creative Director, leaving the Center in 2013.

In July of 2013, at the Annual Art in Bloom Event, Lynn Leimer, Founding Charter Member and MAC Board Ex Officio, composed the following and presented it to Jim.

Lynn continued “AND SO IT WAS SAID, It couldn’t be done….but “they” didn’t know JIM MCKIMM. Jim’s dream to develop a cultural center for Newport was no easy task.

And while there is no “I” in T – E – A – M, there is an “eye” for vision and Jim has it. As an original founding member and board member, I personally witnessed this labor of love. Jim was the driving force behind the Memphremagog Arts Collaborative that has now exploded into a destination point in the Northeast Kingdom. Determination, creativity, and sheer blood, sweat and tears was Jim’s mantra. He walked the walk and talked the talk, garnering support from artists, community partners and financial backers that has brought MAC to its present success.

No one person can take all the credit, but there needs to be a “fearless leader” who not only can understand the artistic facet of an organization, but can manifest a business plan that sustains such a venture; add to that the ability to engage artists to produce, join, participate, volunteer and become viable partners in an esoteric concept and it spells Executive Director of M A C.

Jim’s vision of an Artistic landmark in our corner of the world has proved him to be an Impresario Extraordinaire. Where there is ART, there is magic. As with all things, however, change is inevitable, but the substantial footing that MAC holds in the community is a legacy Jim should truly be proud of as he embraces yet another creative phase of his eclectic journey in the Northeast Kingdom.

Thank you, Jim for your Vision, your Dream, your years of Service and your Grit. You did it!” Jim helped with the celebration of the 10th Anniversary of the MAC Center in December of 2017.

Late in 2013, Jim re-started the Music for a Sunday Afternoon Music Series at St. Mark’s Episcopal Church as the Now Playing Newport Music Series, bring local and statewide artists to perform monthly at the church. It continued at his death.

He is survived by his Partner, Paul T. Becker, Paul’s children, Tracy and Alex, and many friends. There are some cousins, but locations are not known.

Funeral Services were held at 11:00 A.M. on Saturday September 7, 2019 at St. Mark’s Episcopal Church in Newport with the Rev. Bob Wilson officiating. Should friends desire, contributions in his memory may be made to the MAC Center, 158 Main Street, Newport, Vermont 05855. On-line condolences at curtis-britch.com. 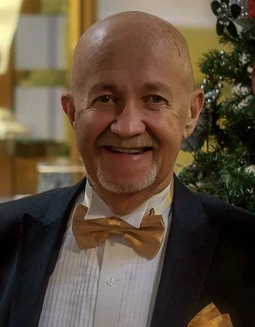