Mimi was born and raised in Rhinebeck, New York. She began doodling with a pen on graph paper at the age of 7. Over the following forty years, Mimi’s designs became more intricate, growing larger and more complex. However, the simple creation remained the same, pen and graph paper.

Mimi went to college and law school in Washington, D.C. and became a family law attorney. She used her doodles to soothe the stress from her job and personal life. After twenty years of practice, Mimi realized how emotionally drained she was. In July of 2014, with the support of her life partner, Bill Davis, Mimi followed her dream of working in the non-profit world.

Unfortunately, in February of 2015, Mimi lost Bill unexpectedly to an extremely rare, but aggressive, abdominal tumor. Mimi and Bill had planned on moving to Vermont in their retirement. To fulfill that dream, Mimi moved from D.C. and now lives in Jay Peak, Vermont.

The desire to create has returned and Mimi is now focused on sharing her work with others. Mimi has been given the nickname “The Doodle Chick” by her friends. These doodles are Mimi’s attempt to create order in the world. 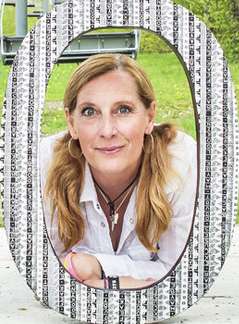