In her own words, Peggy declares that writing is her salvation. In researching Ms. Sapphire, this profile was shared by Antrim House Publishing succinctly detailing her legacy “As the first-generation daughter of an immigrant, union-organizing father from the “old country” and a stalwart feminist mother from the “new,” Peggy was educated in the ways of leaving, losing and keeping secrets. She became her family’s curator, transcribing, at their request, their oral histories. Together with her own, family history is the fulcrum of her first poetry collection, A Possible Explanation, published by Partisan Press in 2006. After almost thirty years as a public-school educator, Special Education counselor and adjunct college instructor, Peggy went against all legitimate financial cautions and retired twenty-five years ago. Her poetry has since appeared in numerous journals including Connecticut River Review, Maryland Poetry Review, and Caduceus, and has been widely anthologized. Her short fiction has appeared in The Underwood Review, and her work has been awarded recognition in several competitions. She has served on the Board of Trustees for The Frost Place and as Editor of the Connecticut River Review. Peggy, and her husband, Robert Feinberg, designed and built their home in the Northeast Kingdom, of Vermont, two miles up a dirt road and three to the nearest country store.”. 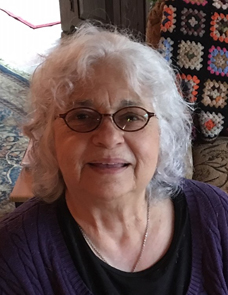